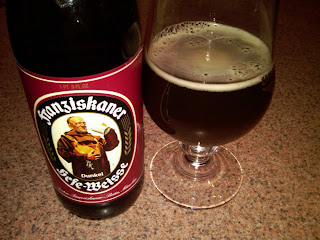 Why I tried this: I had recalled Scott mentioning this brand several times, and saw this particular beer on draft at World of Beer. It was described as a mix between a Dunkel and Hefeweisen, which sounded right up my alley.
Smell: It has a strong scent of yeasty wheat on top of roasted malts. I can also detect a hint of fruit and spices. Very pleasing.
Taste: Has a strong, roasted, malty flavor. There are undertones of wheat, followed by a hint of cinnamon, which was a pleasant surprise and explained the spice smell. Overall, one heck of a taste.
On a scale of 1 to 10, I would give this beer an 8.5/10. Franziskaner's Dunkel-Weisse is one heck of a beer. It has what you like about a hefeweisen, mixed with what you'd expect in a dunkel. You know you're in for a good drink once you take a whiff. At 6.0% alcohol, you couldn't taste any over all of the flavor, which was great. I'd definitely get this beer again, and strongly recommend it.
--Jeff
Posted by Jeff at 12:35 PM