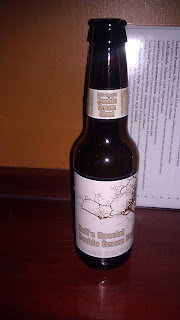 Why I tried this: On another World of Beer adventure I had no idea what to order next.  The waiter we had Kyle typically suggests good beer to me so I told him to bring me a stout that I haven't tried yet.  A few minutes later and this bad boy was sitting in front of me.

Smell: Smelt like your typical stout.  A roasted malt smell.  The coffee scent stands out a bit but not too strong.

Taste: This beer at first tasted like I would expect a stout to taste like.  Since the label said cream stout I did expect a slightly creamier flavor then I sensed but it was still enjoyable.  This beer had a very well rounded flavor none of the malts in my opinion took over the flavor too much.  There was a flavor in the back I couldnt detect that gave it a very good and very original flavor.

On a scale of 1 to 10 I would give this beer an 8.  This beer was very tasty and had a flavor I could not describe that made it more enjoyable.  Other than that this beer tastes like what you would expect a good stout to taste like.  If you are a fan of stouts and haven't had this one out I would definitely recommend it.