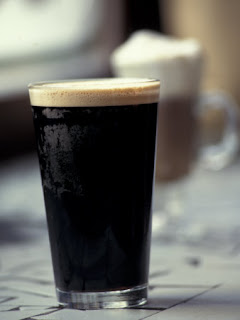 Why I tried this: While Browsing the menu at World of Beer I came across I new stout that I hadn't tried yet so I decided to give it a shot. In addition to looking like a tasty stout it was also from Florida.

Smell: Taking a sniff of this beer was as expected for the most part. Dark malt scent with a very strong coffee malt scent. The coffee smell was much stronger then expected.

Taste: This beer tastes almost exactly as it smells. You get the flavor of dark malts and then the coffee flavor comes in, takes over, and pretty much keeps punching you in the face. I like coffee so this was pretty enjoyable however I do look for more than that in a beer. If you are a coffee junky you will probably enjoy this beer.

On a scale of 1 to 10 I would give this beer a 7.5. This beer was pretty good and drinkable but I do look for a little more depth in my beer then just a strong coffee flavor. Would I get this again? Probably not. If I went to a bar and there were only one or two other stouts on tap I may end up getting this but there are plenty of stouts Id rather drink instead of this.