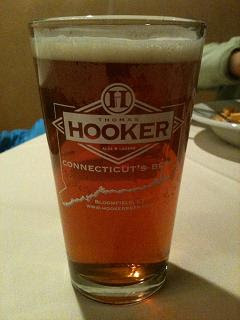 Why I tried this: Erie Smokebender just recently came up on the draft menu, and it was described as a unique beer with a smoked flavor. I had figured smoked would be similar to roasted, so I just thought I was in for a very malty beer. It was worth a try.
Smell: Smoked. Like this somehow just came off the grill. It was very strong.
Taste: Smoked. Unbelievably smoked. I felt like I was drinking charcoal. It was the most awful thing short of Steel Reserve or Colt 45 that I had ever put in my mouth. It was so strong, and there was nothing else I could discern from the taste.
On a scale of 1 to 10, I give this beer a 2. The only reason I gave it a 2 is because I was able to finish it. But, that took a long time, and my stomach felt awful afterwards. I give it a point for personality, but the only people who might even be able to stomach this beer would be heavy scotch whiskey drinkers. Other than that, simply awful. Stay away.
--Jeff
Posted by Jeff at 1:34 PM