I started as a wee lad with no taste for beer at all. The first beer I ever had was a bud light at a college party when I was 19. It tasted like sweaty balls, and I could barely drink it. Fast forward a year, and I had my first Yeungling, which was the first beer I found to be tolerable. It got me into beer, paving the way for all the good stuff to come.

I joined the beer dojo when I met Jon around 5-6 years ago, and we swore that we would train hard to enact our revenge against the Germans for disgracing us and our drinking abilities. Fast forward some bar fights, a few arrests, and lots of shenanigans later, and here I am. The dojo, after succeeding in its goal, ceased to exist. Until World of Beer opened. That's when the old masters of the dojo reassembled. That's when we hatched our next plan to conquer the world. Five hundred beers, one beer at a time. 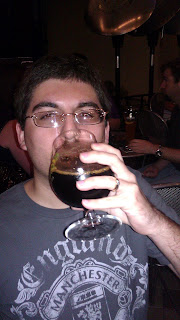