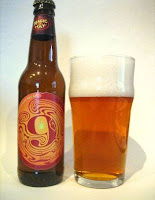 Why I tried this: I've had various Magic Hat beers before, mostly bottles that I've found at Publix. A buddy of mine, Scott, recommended the brand to me about a year ago. I've taken a liking to their beers since then. I had noticed that #9 was freshly rotated on tap during my last World of Beer visit, so I couldn't deny myself my first Magic Hat beer on draft.

Smell: Has a light citrus tone with a bit of hops following. Very well mixed, and pleasant. Could actually do with being a bit stronger, it would be quite nice. A bit of carbonation tickles the nose.

Taste: It starts out as a mild citrus flavor, which then fades into wheat. Then, the aftertaste of bitter hops fills out for the finish. The transition from a light and sweet flavor, to a robust wheat, to a bitter hop is very interesting, but the transition was very well done and nothing seemed out place or forced. I really enjoyed this on draft, much more than in a bottle.

On a scale of 1-10 I would give this a 8. I'm not usually a big fan of pale ales, but this beer really hit the spot. With a medium light body, and crisp, generally moderate taste, it was very drinkable. However, it doesn't sacrifice the flavor to do so, which is why I would definitely recommend this beer. Pale ale fans might find this not quite bitter enough, but I definitely enjoyed it.
--Jeff

I really liked the up front flavor of this beer but did not like the lingering after flavor very much.  7/10