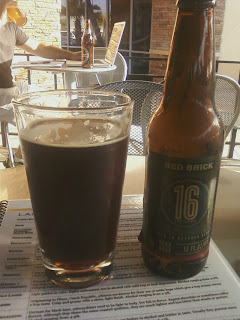 Why I tried this: I was sitting outside at World of Beer UCF watching a Manchester United game, and Panda ninja appeared and asked what I'd like to drink. I wasn't prepared to answer that yet, so I had her get me something, and Red Brick 16th Anniversary is what came out. I've had Red Brick before, specifically their #'s Ale, which I enjoyed, so I was pretty hopeful with this one.
Smell: Had a light scent of vanilla with some moderate maltiness, and a hint of bourbon. I could tell this was going to be a strong beer.
Taste: Damn. That's some complex stuff in there. This beer definitely spent some time making love to a bourbon cask, as it soaked in quite a bit of bourbon flavor. This is balanced out by a sweetness that tastes like caramel, plus some earthly malts. There is no noticeable hop at all.

Overall, I'd give this beer a quarter full glass award. This slightly copper colored brown ale was very special. The bourbon flavor was fairly unique, and there were lots of flavors crafted into this beer that made it quite fun to drink. However, it was highly alcoholic at 11%, which made this one a sipper. I wouldn't mind getting it from time to time. Recommended! Thanks Panda!
--Jeff
Posted by Jeff at 10:06 AM