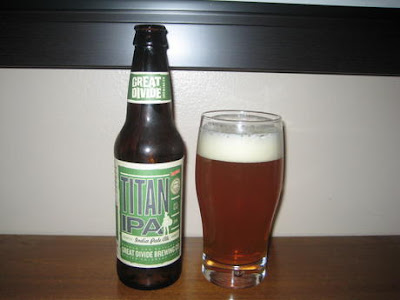 Why I tried this: IPA's are one of my favorite beer types, IPAs are just one of the couple differences Jeff and I have in beer preferences.  While Jeff doesnt enjoy IPAs much I love them, especially when Im not in the mood for a heavier beer.  Great Divide has been a brewery I havent had much of an opinion on.  Ive had a few of their beers before and they were OK not good but not bad either.  While looking at the list I saw Titan IPA by them thought it was a cool name so I decided to give another Great Divide a chance.

Smell: This beer had a great scent to it.  The hops had a floral citrusy scent.  Had a sweeter scent to it as well that Ive found pretty typical of Great Divide.

Taste: This beer overall had a pretty good taste to it.  The hop flavor was not as strong as I would typically expect from an IPA.  The flavors of the sweet malts played a pretty big part in balancing out the hops a bit.  The beer gives you a great hop flavor then you start to sense the sweetness of the malts and as you arrive at the end of your sip you get a finish of some dry hops, but not really overly dry at all.  At 7.8% I really didn't taste much of the alcohol at all which is always a plus.

This beer will receive a rating of 1/4 of a glass left.  I haven't liked much of Great Divide too much but I really did enjoy their Titan IPA.  This beer had a good fresh hop flavor blended nicely with the sweet malt flavor.  If you are into either Great Divide as a brewery or IPAs in general this would probably be a good beer to try.