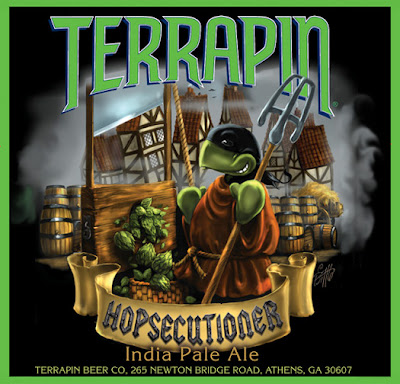 Why I tried this: DID YOU SEE THE NAME OF THIS BEER?!??!!?!? By now you should know I love IPAs!  That being said how could I pass on a beer called Hopsecutioner.  Especially a "Hopsecutioner" that has some hops laid out on the guillotine.  Pretty much enough said, no point going into any more detail.

Smell: citrus scent with some floral in the scent.  Slight malt in the scent that seems to round it out and make the hops less pungent.

Taste: Well not quite as hoppy in flavor as I would expect a beer called "hopsecutioner" to be.  The hops are there and noticeable but not nearly as strong as I had been hoping for or planning.   A bit more of syrupy malty flavor then I would of expected.  I didnt detect much of the citrus scent at all in the flavor.  The caramel malt flavor blending with the hops rounded this beer out a bit more then I would of wanted.  Dont get me wrong I liked this beer, in fact I have a 6 pack of it in my fridge right now, but I would definitely consider it a much more mild IPA.

Overall I would give this beer a rating of a quarter glass left.  It is a beer I will enjoy time to time when I go out.  This beer had a very good flavor and is enjoyable however I wish the hops were a bit stronger in the flavor and make themselves more pronounced.  I would suggest this beer to someone that is interested in trying IPAs before I brought out the big guns of delicious hop tea IPAs.