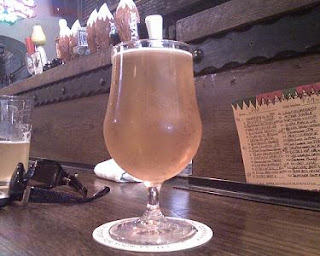 Why I tried this: It was Victory brewery night, so of course I had to have a Victory beer. I had recently had their Whirlwind Witbier as well as a few others, so the St. Boisterous was just a natural progression to the night. It was described to me as a bock style beer, and at 7.4% alcohol. Right on.
Smell: Has a scent of bready yeast and malts. There was a slight sweetness to the smell, as all good bocks should have. Didn't smell the alcohol at all.
Taste: Not too much different than the taste. You have your bready yeast type flavor plus some sweet, earthy malts. It all finishes with a crisp and slightly bitter hop, which was unexpected but not unwelcome at all. Pretty smooth and good flavor through and through.

Overall, I'd give Victory's St. Boisterous bock a quarter full glass. It was a pretty solid effort for a bock, but ultimately it falls short by not doing enough. Its medium body flavor is solid, but not outstanding. The smell pretty much mimics the taste and leaves little up to the imagination. I'm not typically a bock person, so I probably wouldn't get this beer again, but it was definitely a decent beer. I think bock fans out there would definitely be happy adding this beer to their weekly repertoire.
--Jeff
Posted by Jeff at 3:59 PM