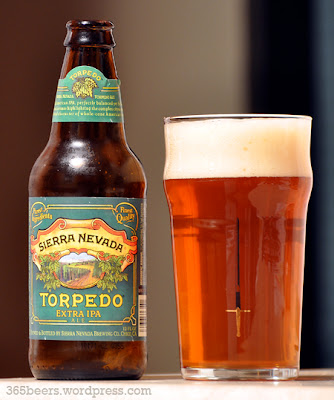 Why I tried this: As per Paul's recommendations at the UCF World of Beer I have continued to try Sierra Nevada beers and they continue to be great. When I saw that they had an IPA I knew that I had to try it.

Taste: Well Sierra Nevada pretty much impressed me again with their IPA, the Torpedo Extra IPA. This beer was pretty hoppy tasting but it was balanced very well with the citrus and sweet flavors. The hop flavor is definitely at the forefront of the flavor but it's nothing that makes the beer too bitter or un-enjoyable. The sweet malt flavor is present yet barely noticeable, pretty much exactly as I prefer it to be in an IPA. The hops and beer as a whole are very crisp and enjoyable.

This is a very good beer and between this and the others I have pretty much decided I love the Sierra Nevada Brewery. This is probably one of the breweries that I really look forward to hopefully one day having a brewery night at World of Beer. This beer receives an empty glass since it is an IPA I will drink again and again. I played pool with my little brother on Monday at Surfers Pub in Cocoa Beach while drinking this beer.