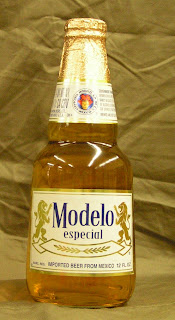 Why I tried this: Ok, don't laugh. I was pretty drunk and was out with Jon at WOB UCF, and thought it would be a good idea to get the rest of my Mexican beers out of the way on my way to 500. Modelo Especial was the next on the list. I originally wasn't planning on writing a review of it, but while I was drinking and commenting on how it was less bad than the other Mexican beers I had that night, he demanded I post a review.
Smell: I honestly couldn't detect anything. There may have been a very slight hop aroma, but it was probably my imagination. The rest was a weak, garbled mess.

Taste: Ugh. Not much better than the smell. There was a trace of sweet malts, and again a trace of lightly bitter hops. Other than that, it was very watery and light, with no real other flavor to speak of. This beer was meant to be slammed, not enjoyed. The only positive part, I suppose, is the lack of the taste. It could have tasted awful, but instead tasted like next to nothing. I guess that's a positive?

I'm just going to go ahead and give this beer a quarter empty glass. There's just no two ways around it: this beer sucks. It's a Mexican beer, and by default that already makes it suck pretty hard. It doesn't do much to improve from that base status. The only time I'd ever drink this again was if I was at a college party playing a drinking game, and it was offered to me as the beer we were going to drink. I would never order this or willingly buy it on my own. But, I guess it could be worse. It could be a Corona.
--Jeff
Posted by Jeff at 3:50 PM